Valentine’s Day was coming when I found an Ad about upcoming Canadian International Auto show and I thought it would make a great gift and also give me an opportunity to have a photo session of fancy cars. I was very excited and purchased two tickets.

Turned out it was a crazy idea to get to Metro Convention Center in downtown, not only because there was an NBA All-Stars basketball event in a city, but also because it was extremely cold that day (-11C or 12F). We hoped it would make majority of people to stay home and it worked to some degree but the showrooms were crowded with people anyway. There were many couples and families among the audience that made me feel good that we didn’t take kids with us and I could give all my attention to the event and photo shooting process.

First we went to a big showroom with new vehicles for 2016: Honda, Toyota, Volkswagen, Audi, and Chevrolet… But all our attention went right away to Challenger Special Addition for 2016, which was a big deal for all cars fans.

One of them was a spectacular Dodge Challenger SRT Hellcat 2016. The car was on a pedestal and it was easy to take pictures of it when it moves around and gives the chance to take pictures from all angles. It was very impressive and it basically looked gorgeous from all angles. I know that it is not only horse power that makes this car so outstanding.
Another Dodge Challenger that was displayed was Dodge Challenger R/T Scat Pack which has a cute cartoon logo on a side. According to the source, it’s an old name dug up from the 1960s days of Mopar glory, used to denote the best Dodges in one group. According to our friends at Allpar, it included the Charger R/T, Dart GTS and Super Bee. That’s where the angry cartoon logo comes from.

There were many impressive cars like Acura NSX, Mitsubishi Lancer Evolution – two liter, turbocharged engines and drive systems. The rumors of discontinuation of the Lancer Evolution program made us very sad. I was looking at the car and the thought that this is the tenth and final generation of the Lancer Evolution. I searched online to find if it is true and found out autoCar UK’s journalist Matt Prior had an interview with Gayu Eusegi, Mitsubishi’s Global Product Director, and quoted him saying ‘The Lancer Evolution X, Eusegi told me, will be the last Evo. “There is still a demand [for the car],” he said, “but we must stop.” Eyebrow up.’[38] This created a lot of discussion on the Internet. It just doesn’t make business sense for me how people could stop producing what is still in great demand? It is no good for buyer no for business owner. 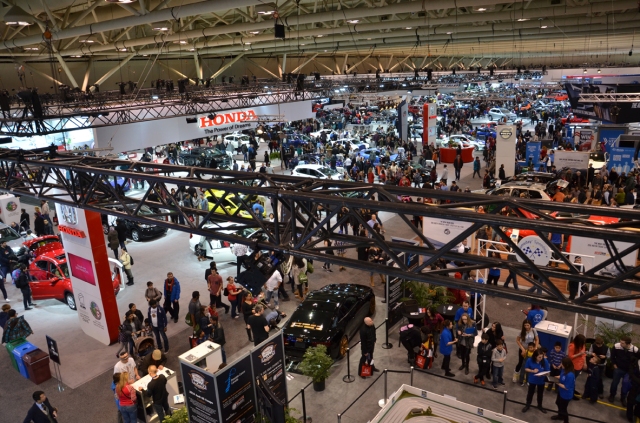 After a tour on the main floor we went to Ford show room, where it was a very different atmosphere. Everything looked cheerful and welcoming, there were even activities for kids and fun zone with rolling around chairs that occupied younger audience, so it would free their parents to enjoy the car show more. Though I must admit that some little kids are already a big car fans and enjoy cars as much as their dads. I see how they observe the cars and use opportunity to get on driver seat and imagine themselves driving it.

I found an interesting stand showing carbon fiber wheel for Ford GT350R that cost more than my car and my car was more than 40K.

When we left Ford area we noticed that one lady was offering to win a free Hyundai car if we fill online application and as a reward promised some tag that could be attached to your keys or phone, anything that you could lose so it will help to track it. We also noticed some sort of the same action in Honda Area. It is not surprising that cars like Audi or Lexus don’t offer such a deal.

Down the escalator there was Ford area and I used a moment to take a photo of Ford GT Shelby looking down from upstairs, showing the vehicle in a spiral of the escalator’s lines. Such a great view of a gorgeous car. It is really doesn’t matter what side and angle to use for taking a picture, all of them turn out just fantastic! Yellow vivid color of paint makes the car the brightest spot on the whole floor. The shape of the exhaust, or the sheer size of GT and paint job got attention of every car enthusiast and made it one of unforgettable moments for myself. I am not car person, but during the show I enjoyed observing most beautiful cars and paid rigorous attention to details of the body parts, that made the vehicle so unique and outstanding.
In case of GT I was interested to learn about unique forward-angled grille that was designed with individual openings to draw air through the radiator, high-pressure engine air intake, cooling cooling ducts for the front brakes designed to tackle the planet’s most challenging roads – an all-day track car that’s also street legal.

“The new GT350 builds on Carroll Shelby’s original idea – transforming a great every-day car into a dominant road racer – by taking advantage of a dramatically improved sixth-generation Mustang to create a truly special driving experience. Driving enthusiasts behind the wheel of a Shelby GT350 can expect to be treated to the most balanced, nimble and exhilarating production Mustang yet”, according to http://www.netcarshow.com/

In contract to Mustang GT350 it was interesting for me to learn that Cobra JET lifts four tires up the ground and is not legal for streets.

After enjoying Mustang GT 350 and Shelby Cobra we went through antique cars and followed the signs proceeded to the show room with high class cars like Maserati, McLaren, Corvette, Alfa Romeo, and Lamborghini. It was a great opportunity for me to practice my photography and be absorbed by elegant car designs and extraordinary paint job. There is no need to describe these brands, it was all beyond words, so I hope my photos could conduct the mastery with models. 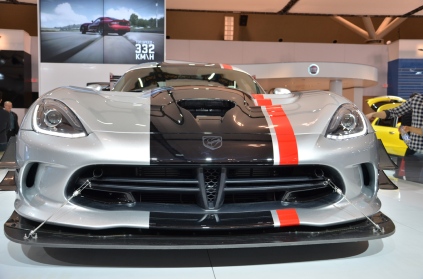 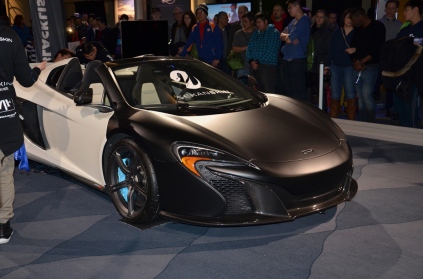 And the end of the car show was the most spectacular by going to the room with the most expensive and top of the line cars where I saw Pagani Huayra the very first time in my life. “Ludicrous in every way and utterly fascinating in every gorgeous detail. This is a million-dollar supercar for those who have grown bored with mere Ferraris and Lamborghinis and already have two Bugattis. Brilliantly quick, tenacious on any surface, and almost freakishly aggressive, it’s a car that beautifully warps the minds of the world’s youth.”